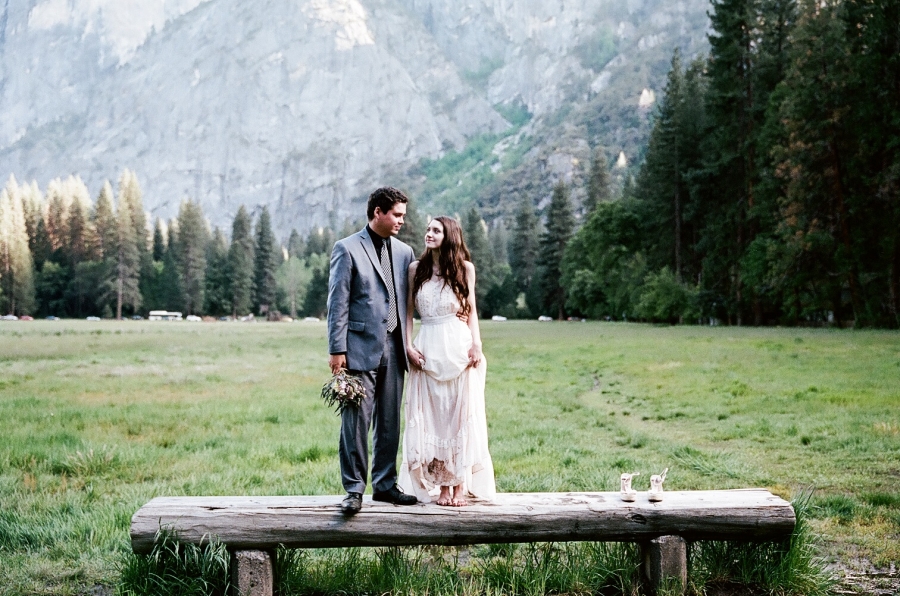 Being a wedding photographer and having Yosemite so close by is a DREAM.  When Hannah asked if we could do her and Elijah’s engagement session in Yosemite, I was very excited and of course said YES!

This couple is very special to me.  I grew up with Hannah’s parents, and their wedding was the VERY FIRST wedding I took photos at!  I don’t count it as my first official wedding because I didn’t charge them (and let’s face it, their photos are horrible), but it’s still a pretty special milestone in my life.  Hannah is sweet, hilarious, and upbeat, just like her mother.  Elijah is a lot like Hannah’s brother–kind, quiet, spiritual, responsible, and loving.  There’s no doubt how much he adores Hannah.  They both hit the jackpot.  They are both in the full-time ministry and their main goal is to work for Jehovah, wherever he needs them.  I’m so proud of them!

They met at an anniversary party for some friends, and it was not love at first sight, or even like at first sight.  Elijah thought Hannah was kind of crazy, and she thought he was a prude.  They were both helping with the children at the party, and it started to rain really hard, so Elijah told the kids to come inside, but Hannah told them to go outside and run around in the rain (they listened to her, duh).  They hung around in the same crowd, and somehow, they realized how well-matched opposites can be, and they started to like each other.  (It’s obvious when you’re with them how he tempers her craziness and she brings him out of his shell.)  Being the gentleman he is, Elijah asked Hannah’s father for permission to date her, and their first official date was attending her brother’s wedding together.  She was concerned about how he would handle all her crazy family and friends, being that he’s so conservative, but he loves them, and they continued dating.

She realized he was “the one” because she could see a happy future with them.  He’s so nice to EVERYONE, helping out in the congregation as much as possible.  They go on adventures together, and she knows that wherever she went with him, she was safe because of him.  He always tries to protect her and make her happy.  He knew she was “the one” very quickly after they started dating.  He said, “It was just easier with her.”

His proposal was unique and sweet.  Hannah’s family were spending the day in Half Moon Bay, Elijah included.  He led her down the beach, then said, “Hey, what’s that sticking out of the sand?”  She dug out the rustic box and opened it, and inside were rose petals, chocolate kisses, and her engagement ring.  He dropped to one knee and she said yes!

Congratulations Hannah and Elijah!  I’m so thrilled for you and proud of your lives together!